While visiting the Napier Museum we spent some time at the archives.

One of the treasures we discovered was this yellowing newspaper clipping of 1893 showing Harriet standing in the doorway of the Western Spit Bethel which later became the Westshore Methodist Church. In the photo it seems that Harriet is the leader of the Mother's Union. Her own son Jack, who would have been around one year old at the time the photo was taken, may have also been in the picture. 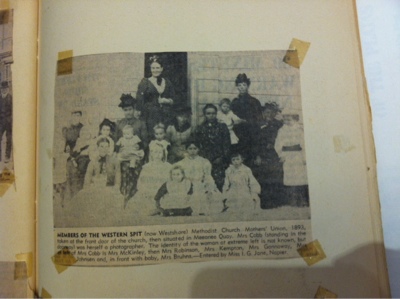 Another of the treasures we were shown were some lovely circular framed portraits of Richard and Emily Lydford. Unfortunately we were not permitted to photograph them. The museum also hold some needlework once owned by the Lydfords.
Posted by KB at 21:50