Percy was born in Christchurch, Hampshire, England on 7 March 1875. He immigrated to New Zealand on the ship Lady Jocelyn with his parents and eight siblings in 1883. The family arrived in Wellington on 1 January 1884. Percy was eight years old at the time.

The Cobb family boarded the ship 'Kiwi' to take them to their new home in Napier. They arrived in Napier on 5 January 1884. Below is the notice of arrivals to Napier.

There they were met by Percy's aunt, Emily Lydford, and her husband Richard who had arrived in New Zealand in 1879. There were three little cousins for Percy to meet: Richard Jnr, William, and baby George.

The Cobb family lived in Port Ahuriri for a short time then shifted to Hastings.

Nothing is known of Percy's childhood at this point. We assume that when his parents Joseph and Harriet moved from Hastings to Napier in 1889, he remained behind with his older brothers. At some point he learnt a trade and moved to Palmerston North where his oldest brothers, Alf and Robert also lived for a time.
According to Salvation Army records, Percy was converted in 1897 and joined the Salvation Army Church. His future wife, Charlotte (Lottie) Mary Drury (1881-13 Nov 1918) is recorded as joining the church the same day.

Percy, it seems, was very musical. He played the cornet in the Salvation Army band, and the photo below indicates that he also played the violin.

The Electoral Roll of 1900 it states that Percy was living in Palmerston North and was working as a tailor. His older brothers, Alf and Bob were also living there.
On 16 April 1902, Percy (27) married Charlotte (Lottie) Drury at the Salvation Army Barracks in Palmerston North. Lottie was the daughter of English-born immigrants, John Drury [originally Amos; Drury was his mother's maiden name] (Apr 1853 - 27 Mar 1927), a labourer (later a gardener), and his wife, Emily Jane Couper (Jan 1856 - 21 Mar 1930). The Salvation Army band, of which Percy and Lottie belonged, played during the wedding ceremony. The reception was held at Lottie's family home.


The following announcement of the wedding was printed in the Manawatu Standard on 17 April 1902.
The newly married couple set up their home in Albert Street, Palmerston North. Later they moved to Church Street. Percy and Lottie had three daughters:
The Electoral Roll of 1905/06 states that Percy and Charlotte lived on Ferguson Street. Family records suggest their home was at number 269.

Both Percy and Lottie played in the Salvation Army band. The photo below shows Percy with a cornet and Lottie with a euphonium.

In August 1905 Percy had become partners in a tailoring business named Cobb, Oliver & Purcell which was located in the Theatre Buildings in The Square, Cuba Street. In the newspaper advertisement below, we notice that Percy had 12 years experience prior to this, as a cutter.

In September the business had been shifted to better premises on Cuba street in the Palmerston Buildings. Mr Purcell didn't last long in the business, because, by the end of 1905 it was advertised as simply, Cobb and Oliver.

In 1906 the following notice was printed in the local paper on 28 August, and we believe the Mr Cobb mentioned in it refers to Percy:

A large calico sign recently erected
in front of his property in Church street
east by Mr Cobb, to give notice of a
sale, was torn down and carried away
last night by some maliciously-disposed
individual.

On 3 February 1907 Percy and Charlotte welcomed baby Clarice into their family. She was born at their home on Church Street East, Palmerston North. The birth notice in the Manawatu Standard read as follows:

Percy had a brush with the law in January 1910 when he was convicted and fined for driving his cart without lights.

Also in 1910, P Cobb and W Cobb were present at the Oroura Lodge of Druids business meeting and were given official responsibilities for the following six months.

Joyce (later, known as Joy) was born on 19 May 1912 (date to be confirmed). Here is a lovely photograph of the three sisters.

At some point Percy left the tailoring business, and in 1911 he was living in Pahiatua, and worked as a carter. Lottie stayed behind in Palmerston North and lived at 118 Broad Street. The reasons for this arrangement are unknown at present.

In 1914, Percy, Lottie and their girls were living at 3 Amesbury Street, Palmerston North.


Clarice was part of her Aunt Emily Drury's wedding party in December 1914 along with her cousin and two other aunts.

In 1916, P Cobb is mentioned as being at a half-yearly business meeting of the Oroura Lodge of Druids, along with R C Cobb.

It seems as though the Cobb girls attended the Terrence End School in Palmerston North. Newspapers reported that Marjory passed her proficiency exam in 1916 and that Joyce attended the annual picnic on 6 February 1918, and came first equal in the running race for girls under six!

Percy was put on the World War 1 Reserve Roll, 2nd Division, in 1917, along with his brothers, Alf, George and Harold. At the time he was living at 269 Ferguson Street, Palmerston North and was a Gas Company employee.

In 1918 Percy and his family resided at 9 Oxford Street. The influenza pandemic hit the Cobb family suddenly later in the year, with Lottie contracting it. Symptoms of the pandemic were severe and the casualty list high all around New Zealand. Poor Lottie passed away on 13 November 1918 at Palmerston North Hospital, aged 37. Lottie was buried at the Terrence End Cemetery, Palmerston North, Block 052 (the Wesleyan block), Plot 023. A photo of her grave can be seen here.

Lottie's death came as a shock to the family, particularly Percy, judging by the memorial notices in the newspaper one year afterwards. It also seems that Percy struggled to cope after he lost her. The three girls were sent to live in Salvation Army children's homes. At some point, his youngest daughter, Joyce, went for a holiday to her Auntie Elsie's home and she was eventually adopted by her in 1923. The other two girls stayed at the children's homes. They ended up working as Salvation Army officers.

In 1921 Percy married Matilda Amelia Emma Ward (nee Cox). She was known as Emma, and was 12 years younger than Percy. Her first husband, Henry William Ward, had died in late 1919 aged 40, leaving her with five young boys:


Percy's youngest daughter, Joyce (Joy) was officially adopted into his sister, Elsie Ashcroft's family, in 1923. It appears that Percy's new wife was not keen on keeping his three girls and seems to have actively discouraged them from having a relationship with their father although they tried.
The father of Percy's first wife, John Drury (73) died on 27 March 1927. He was buried at the Terrence End Cemetery, Block 34, Plot 49.

Percy and Emma moved homes frequently. In 1928 they were living at 22b Bourke Street and in 1935, at 201 Princess Street. Percy was working as a pastry cook during this period.
Percy's mother, Harriet died.
The mother of Percy's first wife, Emily Jane __ (73) died on 21 March 1930. She was buried next to her husband at the Terrence End Cemetery, Block 34, Plot 51.

The Auckland Star newspaper reported that on 16 March 1934, Mr P Cobb was staying at the Metropolitan Hotel, which was situated on the corner of Fort and Queen Street, Auckland. It seems that Percy was up in the big city looking for work. It seems his search was successful, for in 1935, the Cobbs moved to Auckland for a short time and lived at 90 Ponsonby Road. Percy worked as a cook there. When they moved back to Palmerston North in 1938, they returned to 201 Princess Street.

Percy died on 7 July 1958, aged 83 years. Emma died on 11 September 1970, aged 87 years. Their last place of residence was Flat 2, Papaeoia Place. The are both buried at the Kelvin Grove Cemetery in Palmerston North, in Section M (the General Lawn), Block 014, Plot 045. A photo of their grave is shown below. 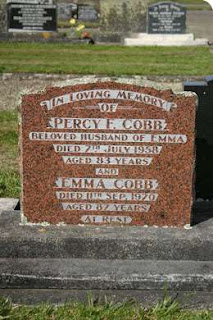 The children of Percy & Charlotte Cobb


Notes about the Drury family (from Births Deaths and Marriages)