Central Napier, as the Cobbs knew it

Napier was quite a busy little town when the Cobb family arrived there in 1884. The following photographs of central Napier are from the Hawkes Bay Museum's collection. 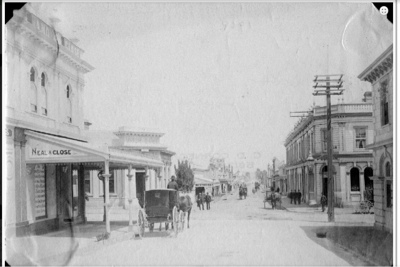 Looking down Emerson Street from Marine Parade at the intersection of Emerson and Hastings Streets. This picture was taken by the Burton Brothers in the late 1880s or early 1890s. 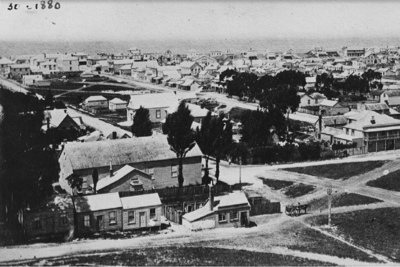 This view of Napier is from Napier Hill. It was taken by an unknown photographer in the late 1880s. 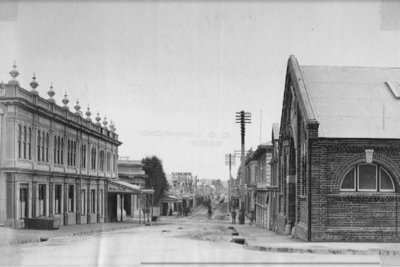 This view down Emerson Steet from Marine Parade was taken by an unknown photographer, between 1874 and 1897. 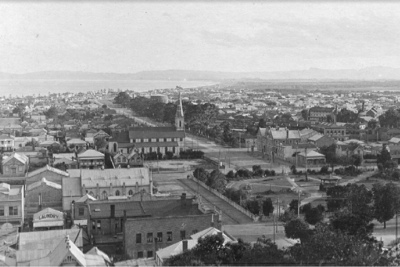 This photo of Napier taken from Napier Hill shows Clive Square in the foreground to the right. Directly opposite on the left of the park is Trinity Methodist Church, a whitish building which was where the Cobb family worshipped. This photo, by an unknown photographer, was taken in the late 1890s or early 1900s. 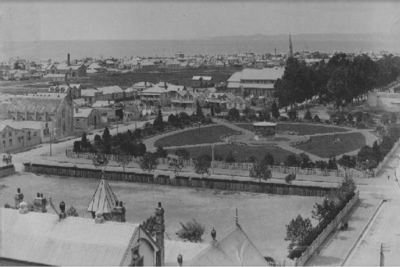 A view of Clive Square with the Trinity Methodist Church to the left. The Napier District School is in the foreground. This photo was taken from Milton Road by an unknown photographer, in 1896. 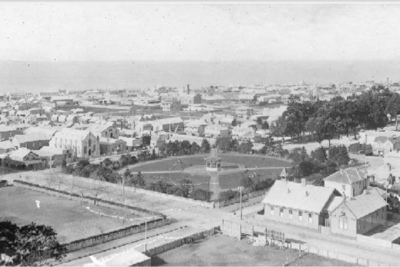 This view of central Napier was taken from Napier Hill by an unknown photographer, around 1889. 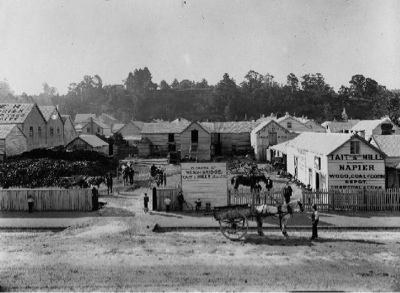 The view taken from Dickens Street towards Napier Hill. On the left can be seen the rear of the Trinity Methodist Church. This photo, by an unknown photographer, was taken around 1900. 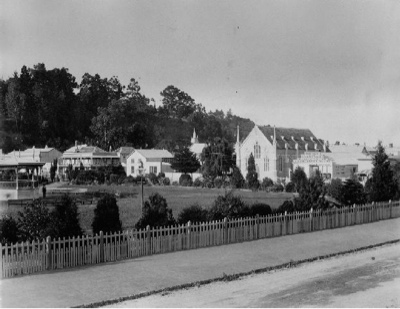 A view of Trinity Methodist Church from Dickens Road, with Clive Square in the foreground. This photo, by an unknown photographer, was probably taken in the late 1890s. 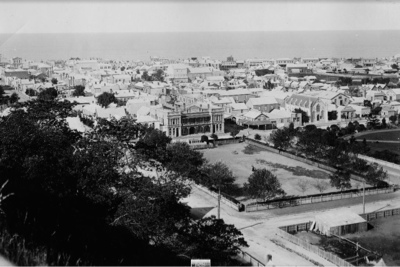 This view of Napier, taken from Napier Hill, was taken by an unknown photographer around 1908. 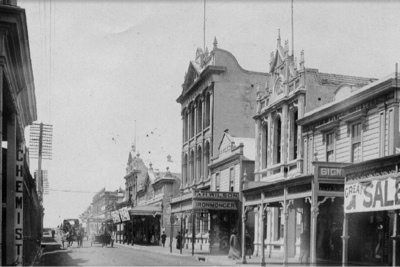 Emerson Street, looking towards Marine Parade. This photo, by an unknown photographer, was probably taken in 1908.
Posted by KB at 08:19 No comments:

Emily Valentina Lydford (née Day) was the younger sister of Harriet. She married Richard Lydford in 1879, and five days later, emigrated by ship to New Zealand!

The following photos are in the collection owned by the Hawkes Bay Museum. They were probably taken by Emily's sister Harriet Cobb, or her brother William J Day, in Bournemouth, England, prior to their emigration.

The Lydfords had several children including William, who was an invalid for much of his life. The following photograph of him was taken by his aunt, Harriet Cobb in 1896.

Five days after their wedding, Richard and Emily boarded the ship 'Rakaia' in Plymouth which set sail for Wellington, New Zealand. They emigrated under the 'Assisted Passage' scheme. On board with them was Richard's older sister Mary, who was then 32 years old. She was employed on the ship as matron which meant she took care of all the young girls on board during the journey.

Emily wrote this lengthy poem in September 1879 during the voyage to New Zealand, and later sent it to her mother in England. The letter that accompanied the poem was dated 5/10/1879.

On Board the Ship 'Rakaia'
Upon the last bright day of May
There sailed from Plymouth Sound,
The ship 'Rakaia' with emigrants
For a far distant clime.
In this good ship for three long months
Three hundred souls or more
Would try to make a happy home
Unitl we reach the shore.

Old England's shore we grieved to leave
And all kind friends so dear
But in New Zealand we will try
Friends as kind to make.
Some have friends to meet them
And how jolly they will be
And what a lot there'll be to tell
Of friends far o'er the sea.

Now we will try and tell you
Of how we spent the time
And tried to make things pleasant
Before we crossed the Line.

The Captain was a jolly man
As you'd ever wish to see,
He did his best to please us all
And well he did succeed.
On Sunday morn he always held
A service for us all
That though upon the sea so wide
We might not heathens be.
And in the evening of that day
A lecture he would give,
And hymns we'd sing so very sweet,
And so would end the day.

A doctor, too, we had on board,
And very kind was he.
The people's wants he would supply
From his small surgery.
With Castor Oil, powders, pills,
And such like things as these -
Beef tea, Mutton broth, Sage, Arrowroot,
And nice large tins of milk.

On Monday we would have our stores
Served out to one and all,
But many could not make them last
Until the week was o'ver.
These stores consisted of such things
As Sugar, Butter, Treacle, Mustard,
Pickles, Pepper, Tea and Coffee,
Salt and Biscuit hard.

On Tuesday and on Thursday
Some washing we could do,
And o'ver the tubs and soapsuds
There'd sure to be some fun,
And long before the hour of noon
Up in the rigging high
These clothes would be upon the line
And in the sun to dry.
Clear starching - that we could not do -
Ironing was just as bad,
So we would fold them up so smooth
And home-made mangling do.

On Wednesday and Saturday
Some flour and fruit we'd get,
And puddings, pasties, pies and cakes
We'd set to work and make.
And when these things we had made up
To the galley we would go
And ask the cook to bake them well
And we would thank him so.

Sometimes he baked them very nice,
And we enjoyed them much,
At other times he'd bake them black
As any coals could be.
Chance time the cakes would not be done
And just like dough they'd be,
We could not eat a little piece
So we threw them in the sea.
But this we knew he could not help,
For if there was no wind
The flues to draw he could not make
And get the ovens hot.

One day while making pies and cakes
Into a passion grew
A woman, she's so very nice,
And at her husband threw
First a can of water clear,
Then a tin of flour,
The fruit and suet followed soon
But all went on the floor.

For breakfast porridge we would have
And rice for tea there'd be.
For dinner we could have a change,
But this is all t'would be -
Boiled beef and carrots,
Potted meats and onions,
Salt pork and puddling,
Pea soup and bread.

And those who had young babies
Bottled stout would get,
And this would cause dissension
Amongst this fair bright sex;
They thought that they would also have
Their share of bottled stout,
But if enough was brought for all
The weight would sink the ship.

Our bunks we'd like for you to see
You would admire them much.
Our mattress and our pillows are
As hard as boards could be.
And oft' at night when it is rough
We roll from side to side,
And if the boards we did not hold,
On to the floor we'd pitch.

But we must not omit to tell,
Of the rows we hear at night,
Amongst the tins and teapots
When rolling off the shelves.
We soon found out a better plan
Than leaving them to fight,
We got some string and lashed them on
To post and shelf so tight.

We had some watchmen for the night,
To see that all was safe,
And every half hour you would hear
"All's well in the Main Hatch."
It took us some three weeks or more
Some stong sea legs to find,
Before we could with pleasure walk
Together on the deck.
But now we can with easy grace
Our bows and curtseys make
To everyone and everything,
When walking on the deck.

Now these three hundred people,
Were divided into three,
To keep in peace and quietness
Us people on the sea.
The single men to the Fore were sent,
The single women Aft,
And all the married people
In the centre place were put.
The single girls like prisoners are
For they may never step,
Unless a "Matron" with them was,
Upon the Quarter Deck.
One day a screen there was put up
Across the Quarter Deck,
And we the reason thus were told -
"The men are looking Aft."

Now these dear girls would like some fun,
And what a noise they'd make,
They'd "Thread the Needle" round the Port,
And all the babies wake.
Two single men to have some fun,
To the top of the Mast would go.
They were enjoying it so much
When up the sailors flew,
They caught them and they lashed them
Up on the mast so high,
And oh! What fun it caused to all
The people down below.
No more would try this little game,
They had seen quite enough
Of how the sailors would them serve
If up the Mast they got.

Now this short ditty we must close
For Wellington is near,
And we have much that we must do
Before we go on shore.
Everything must look its best
And faces must be bright,
Or when our friends on land we meet
They'll think that all's not right.

To Captain, Doctor, Mates and Crew,
Our heartiest thanks are due,
For all their care and kindess shown
To us whilst on the sea.
Now to the Lord our God,
Our prayers and praise we give
For all His mercies to us shown
While on the wide, wide sea.

When the Lydfords arrived in Wellington they took a steamer up the coast to Napier, along with Mary. It is thought that they may have been met by Richard's twin brother Sam who had come out to New Zealand beforehand. It is understood that Mary didn't stay long in the Hawke's Bay. She married and went to Australia with her husband. Perhaps they followed her brother Sam (Richard's twin), who had also left New Zealand and settled in Australia.

Richard and Emily had seven children. All were born in Napier:
The Lydford family moved around a bit in Napier. We do know that they lived for some time on Roslyn Road on Napier Hill. Later they lived on Carlyle Road, and some of the children resided at 7 Nelson Street.

This is Bob and Alice Cobb with their first child, Lionel. The photo was probably taken in 1909. 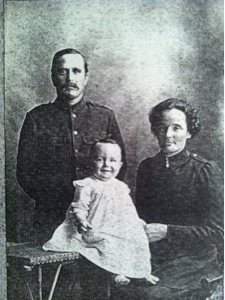