Mary was the second daughter of Joseph and Harriet. She was born in Christchurch, Hampshire on 23 October 1878. Mary immigrated to New Zealand with her parents in 1883 on the ship, Lady Jocelyn. The family arrived in New Zealand on 1 January 1884. Mary was five years old at the time.


Here are some photos from Mary's childhood prior to arriving in New Zealand.


The Cobb family boarded the ship 'Kiwi' to take them to their new home in Napier. They arrived in Napier on 5 January 1884. Below is the notice of arrivals to Napier.

There they were met by Mary's aunt, Emily Lydford, and her husband Richard who had arrived in New Zealand in 1879. There were three little cousins for Mary to meet: Richard Jnr, William, and baby George.

The Cobb family lived in Port Ahuriri for a short time before shifting to Hastings around 1885. The Cobbs returned to live in Napier in 1889.

Mary must have been well-loved by her Aunt Emily & Uncle Richard Lydford, because on 28 September 1886, when Mary was about eight years old, they named one of their twin daughters after her! Sadly though, baby Mary Elizabeth Lydford lived just three days. The cause of her death is unknown.

According to family records, Mary worked with her brother Harold, in their mother's photographic business on Emerson Street, Napier, for a while. She was also very musical, singing solos numerous times at church and social functions. She was a member of the Trinity Church choir. It also seems likely that she was the Miss Cobb which was elected to the re-formed Wesleyan Tennis Club committee, along with Mr R Graham (her future husband), in November 1901.

One of the few photos in which Mary and Robert are pictured together prior to their wedding is below. It is unclear when the picture was taken or what the occasion was.


Mary's sister, Alice (known as Mabel), was married on Wednesday 26 March 1902 at the family church, Trinity Methodist Church, in Napier. Mary and her younger sister, Dorothy, were the attendants, and their brother, Harold was the groomsman.

According to information on the Electoral Roll, Mary did 'domestic duties' for a living.

It must have been heartbreaking for Mary to learn the news that her sister Mabel had passed away on 18 February 1903, just 11 months after her wedding, and just five days after giving birth. Mary and Mabel were very close and the loss must have been keenly felt.

A year after the death of Mabel, the church newspaper, The Outlook, reported that Mr Prime, on behalf of the church choir, presented Mary with what her father described as a "handsome" silver hot water jug/coffee pot to celebrate her up-coming marrige. Mr Prime spoke of Mary's great qualities and of her dedication to the choir and her other contributions at the church.
On 30 March 1904 Mary married Robert Grier Graham Jnr (11 Jan 1878 - 20 Oct 1951) in the Trinity Methodist Church in Napier. Here is their wedding notice:

A more comprehensive description of the wedding is given here: 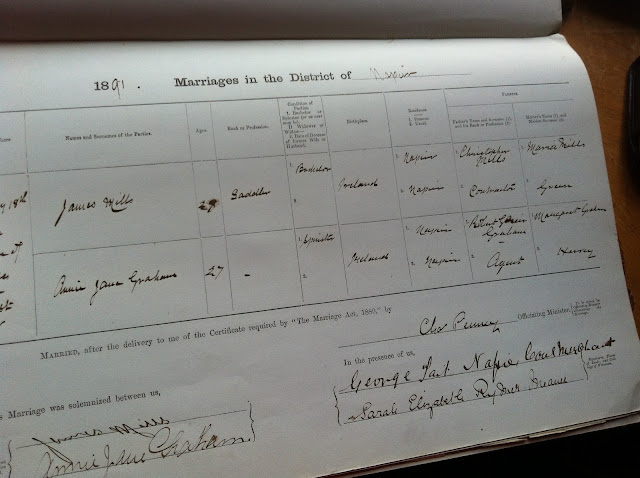 Robert's father, also called Robert Grier Graham, came to New Zealand in 1864. His younger sister, Maria Graham (1847 - 1902) and brother, William John Graham (1849 - 1917), also immigrated to New Zealand. Robert Snr was a local body politician in Napier, serving with the Borough Council from 1881 - 1888). There are numerous advertisements in the Hawke's Bay Herald from him, listing properties for rent. The Graham family lived for many years in Bower Street, Napier, however, in September 1905 their nine room home, which was rented out at the time, was gutted by fire.

Initially Robert Jnr worked as a harness maker. From 1905 he had his own saddlery business in Bridge Street, Ongaonga. Following that he became a farmer.

After their wedding, Robert and Mary settled in Ongaonga. They moved into a small, newly built cottage in the small township that Robert had built prior to their marriage. (Ongaonga was named after the native stinging nettle with the same name.) Robert was very involved in the local tennis club. Another Graham family (Sam & Phoebe), also lived in the town at the time and ran the local livery stables, but it appears the two families were not related, or at least close relatives.

At 10:20am on 9 August 1904 there was a sizable earthquake that was felt all through the Hawke's Bay region, including Onga Onga, and even as far afield as Wellington.

In September 1904 it seems that a Mrs Graham helped to set up and decorate the Onga Onga Hall for a ball, and later, a social to celebrate the end of the pingpong season! We are not sure if this refers to Mary, or the wife of Mr Sam Graham who ran the livery stables in the town, quite possibly the latter.

Robert and Mary had one son:


In August 1907 Robert's horse was impounded by the ranger. The horse was described in the Impounding Notice as "one dark bay gelding, white patch on forehead, white snip on nose, two shoes on and two white hind fetlock, Onga Onga cover on."

Mary contracted tuberculosis and suffered for some time with the effects of it. On her deathbed, just a few days before she died, Mary wrote the following heartfelt letter to her one year old son, Gordon:

My dearest little Gordon,
As I write this to you I am lying very ill, and God will soon take me home to heaven to be with him for ever. It is very hard to leave you - my darling and to know you will have no mother to watch over and care for you - but - Jesus will take care of you - for I have asked him. I love you so very very much my darling that somtimes 'when I was well' I was afraid God would take you away from me - in case I made an idol of you - but - Jesus says he loves us more than we can even think - so if I love you so much as that - how much more must Jesus love you. Oh! Gordon dear - I do want you to give your little heart to him - for that is what he wants, and you will be so happy - and when you are in trouble just go and tell Jesus. Remember mother is in heaven looking down upon you - and by and by when Jesus calls you and daddy home - we shall meet each other on the golden shore. Goodbye my own darling. God bless you and help you to grow up to be a good man - This is your mother's dying prayer - I commit you into God's keeping - My own sweet baby!

Mary's death left Robert with the challenge of raising a small child as well as running the family farm. It was too much for him, so little Gordon's Aunt Ida took change of his care.

A few months after Mary died, Robert's father also passed away at his home in Bower Street, Napier on 9 July 1908. A detailed obituary was published in 'The Outlook', 19 September 1908, page 36.

It is said that the town of Onga Onga was at its peak at the outbreak of World War 1, then declined when all of the town's young men went off to war. Robert's saddler shop was operating in 1914 and was located in the middle of Bridge Street, next to Mrs McBride's Tearooms which also sold fruit and sweets, and J Baker's carrying contracting business.

Also in 1914, Robert won the right to purchase 333 acres of land in Springhill, a short distance from Onga Onga (Section 12, Block 3) in a land ballott:


It was announced in papers the following year that he proposed to build a homestead on it. Robert's farm was situated next to the original Springhill Homestead (no longer there).

The home below still stands on the farm on Lot 12 which was once owned by Robert. Apparently it was built in 1880, and is still inhabited.

Three years later, Eva left Robert without warning. Robert filed for divorce in 1926. His evidence can be seen in the following newspaper report, published in the Manawatu Standard 3 February 1926: 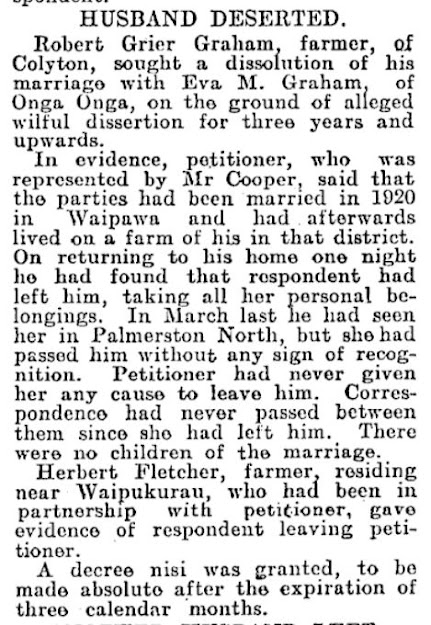 Electoral Rolls show that in 1938, Robert G Graham was farming first in Onga Onga, and later on Pinfold Road, Woodville.

In 1946 and 1949, Electoral Rolls show that Robert, along with his sister Ida, and son and daughter-in-law, Gordon & Elsie, were living on Pinfold Road Pahiatua. Robert and Gordon were both listed as farmers.

Robert Graham died on 20 October 1951, aged 73. He was buried at the Old Gorge Woodville Cemetery, Main Block, EXT 4, Grave 29. Click here to see a map of the cemetery. Robert is listed as a Methodist in the cemetery records. His second wife, Eva, died on 16 April 1964, aged 84, in Wellington. Her body was cremated.

Gordon continued to run the farm on Pinfold Road after his father died, and following his death, his son and daughter-in-law farmed there.

Gordon Harvey Graham was the only child of Robert and Mary Graham. He was born in Onga Onga in 1906. His mother passed away a few months following his first birthday. Gordon was raised by his Aunt Ida, his paternal aunt. Here are some pictures of Gordon's first few years:


The Onga Onga Junior Football Team of 1929-30 had a G Graham in it. It may be Gordon althought this is unverified at this point. Click here to find the Onga Onga Centennial Celebrations Booklet which contains a photo of the team.

Gordon was farming in Springhill, near Onga Onga in 1938. It appears that his wife Elsie was temporarily living in Waipawa with Mrs E Macdonald (her mother?).

Gordon died on 18 May 1978, aged 72. He was buried at the Lawn Cemetery, Woodville, Section B, Grave 51. His wife, Elsie died in 1982, aged 78. She was buried next to her husband (at Grave 53). They are listed in cemetery records as being Methodist. A photo of their grave can be found by clicking the link here. Click here to see a map of the cemetery.

Ida was born in Napier in 1873. It seems, she was an actress, performing at least once professionally in 1908 and also in 1911. According to Electoral Rolls, Ida resided in Springhill, Onga Onga in 1919, and in 1928 she lived in Masterton. From 1935 it appears that she lived with her brother Robert, then in the mid to late 1940s she lived on Pinfold Road, Woodville, presumably, on the family farm. Family records suggest that later in life Ida mostly resided at Onslow Park, Pahiatua, with her sister Ethel, and brother-in-law George Smith.

Ida passed away on 3 July 1950, aged 77, and was buried at the Mangatainoko Cemetery, Pahiatua, Block 4, Plot 11, Grave 60. Click here to see a photo of her grave and here to see a map of the cemetery.